The Walden Woods Project maintains the preeminent collection of works by and about Henry David Thoreau. We continually digitize content from our collections to increase the material available on-line. On this page, you can access all of the works by Thoreau that are currently available in digital format. 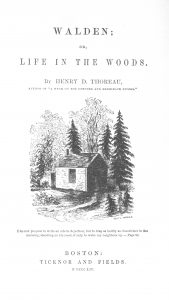 A collaborative initiative of the Walden Woods Project, The Thoreau Society, and SUNY Geneseo, offering a “fluid text” edition of Walden that traces the work’s development across its seven manuscript versions, as well as a social reading platform for exchanging ideas in the margins of Thoreau’s works.

Some trees, as small Hickories, appear to have dropped their leaves instantaneously, as a soldier grounds arms at a signal; and those of the Hickory, being bright yellow still, though withered, reflect a blaze of light from the ground where they lie.—"Autumnal Tints"