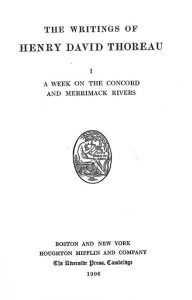 This edition of the writings of Thoreau is complete in a way which was impossible in the case of all previous editions, for it contains his entire Journal, which has only recently become available for publication. The four volumes of selections from the Journal edited by his friend and correspondent, Mr. H.G.O. Blake, into whose hands the manuscript volumes passed on the death of Thoreau’s sister Sophia, contained only a small part of the whole, and reflected to some extent, as was inevitable, the tastes and interests of the editor. Moreover, the manner chosen for presenting the extracts afforded no such complete view of Thoreau’s daily life and the development of his genius as is now obtainable from the entire Journal, printed in the strictly chronological form, just as it was written.

The writings divide themselves naturally into two sections, the Works and the Journal, the former containing the books, essays, lectures, addresses, and poems which Thoreau himself prepared, more or less completely, for publication. (The Letters have for convenience also been included in this section.) But while this division is natural when the writings are viewed in their present form, there is really no inherent difference between the two sections, for all Thoreau’s works — the two books that he printed during his lifetime, as well as the volumes compiled after his death from his published and unpublished essays and addresses — were drawn almost entirely from his Journal, the thoughts and observations there recorded from day to day being revised and reshaped to fit them for their more permanent form. By far the greater part of the earlier Journals, drawn on in the writing of “A Week on the Concord and Merrimack Rivers” and “Walden,” appears to have been destroyed by Thoreau in the process; but enough remains fortunately to show something of the author’s methods of work, and the reader will find it interesting to compare the published passages indicated in the footnotes to the Journal with the original entries, to see the conditions under which the matter was first written and observe the alterations made in adapting the particular to the general and giving the substance a more perfect literary form.

Besides the portraits which are an indispensable accompaniment of such a definitive edition, and the numerous rude cuts, copied faithfully from Thoreau’s own sketches, which will be found in the Journal, the illustrations consist of photogravures of scenes and objects described by Thoreau. For these pictures the reader is indebted to Mr. Herbert W. Gleason, whose services in illustrating this edition the Publishers count themselves especially fortunate in securing. Mr. Gleason has made a careful study of all Thoreau’s writings, including the manuscript Journal, and has explored with equal thoroughness the woods and fields of Concord, visiting the localities mentioned in the Journal and getting photographs, not only of the places themselves, but also of many of the fleeting phenomena of the natural year in the very spots where Thoreau observed them. He has even succeeded in identifying a number of localities described and named by Thoreau which had previously been unknown to any person now living in Concord . He has also followed Thoreau in his wider wanderings, and his portfolio includes views of Cape Cod, the Maine woods, and the banks of the Merrimack River. It will be apparent that Mr. Gleason’s pictures are in the fullest sense illustrations of the text which they accompany.

The Riverside Edition of 1893 is the basis of the present edition of Thoreau’s Works, but to secure a more compact form several changes in arrangement have been necessary . Emerson’s Biographical Sketch, originally published in “Excursions,” and in the Riverside Edition transferred to the volume entitled “Miscellanies,” is now printed at the beginning of this first volume, “A Week on the Concord and Merrimack Rivers,” as a most fitting introduction to the complete works of his friend. “Walden” and “The Maine Woods” are printed without change. The prose papers included in the Riverside volume entitled “Miscellanies” are now added to “Cape Cod,” while the Poems appear with ” Excursions” in Volume V. The sixth volume contains the “Familiar Letters” and a General Index to the Works. The four volumes of “Journal” extracts edited by Mr. Blake, — “Early Spring in Massachusetts,” “Summer,” “Autumn,” and “Winter,” — being superseded by the publication of the complete Journal, are not included in the present edition.

It is not enough to be industrious; so are the ants. What are you industrious about?—Thoreau to H.G.O. Blake, 16 November 1857