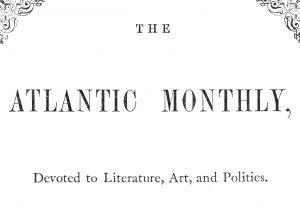 Francis H. Underwood (1825-1894), an assistant editor at Phillips, Sampson and Company, wanted to create a periodical comparable to Harper’s New Monthly Magazine (1850- ) and dedicated to the literature and culture of the Boston area. The original concept of the literary journal included featuring abolitionist works, Transcendentalist authors, and Fireside Poets. In addition, Underwood desired a livelier and more current publication than other well-established journals, such as North American Review (1815-1940) and The Christian Examiner (1813-1870). Initially, the assistant editor attempted to work with John P. Jewett (1814-1884), publisher of Harriet Beecher Stowe’s (1811-1896) Uncle Tom’s Cabin (1852), as well as anti-slavery pieces, textbooks, and religious texts. Responding to Underwood’s request for contributions in the fall of 1853, Henry David Thoreau (1817-1862) submitted a 57-page manuscript, possibly the essay “Chesuncook” (1853). By 2 December, however, Jewett had declined to publish the new magazine and Underwood returned the manuscript to Thoreau.

In January 1858, at Lowell’s repeated request, Thoreau submitted “Chesuncook,” an account of the 1853 trip to Maine, for publication in three installments. Because the editor of Putnam’s Monthly Magazine of American Literature, Science, and Art (1853-1857) modified “An Excursion to Canada” (1853) and Cape Cod (1855) without permission, Thoreau requested pre-publication proofs of the essay. When the proof sheets arrived after the second request, the author found Lowell had removed a sentence against Thoreau’s wishes in spite of his “stet” notation, an indication to ignore edits. Lowell used blue pencil to strike through the second sentence of the passage, “It is the living spirit of the tree, not its spirit of turpentine, with which I sympathize, and which heals my cuts. It is as immortal as I am, and perchance will go to as high a heaven, there to tower above me still.” Offended and furious, Thoreau sent a letter  on 22 June 1858 to the editor, chastising Lowell and requesting a note about the omission in a future issue.

When I received the proof of that portion of my story printed in the July number of your magazine, I was surprised to find that the sentence — “It is as immortal as I am, and perchance will go to as high a heaven, there to tower above me still .” — (which comes directly after the words “heals my cuts,” page 230, tenth line from the top,) have been crossed out, and it occurred to me that, after all, it was of some consequence that I should see the proofs; supposing, of course, that my “Stet” &c in the margin would be respected, as I perceive that it was in other cases of comparatively little importance to me. However, I have just noticed that that sentence was, in a very mean and cowardly manner, omitted. I hardly need to say that this is a liberty which I will not permit to be taken with my MS. The editor has, in this case, no more right to omit a sentiment than to insert one, or put words into my mouth. I do not ask anybody to adopt my opinions, but I do expect that when they ask for them to print, they will print them, or obtain my consent to their alteration or omission. I should not read many books if I thought that they had been thus expurgated. I feel this treatment to be an insult, though not intended as such, for it is to presume that I can be hired to suppress my opinions.

I do not mean to charge you with this omission, for I cannot believe that you knew anything about it, but there must be a responsible editor somewhere, and you, to whom I entrusted my MS. are the only party that I know in this matter. I therefore write to ask if you sanction this omission, and if there are any other sentiments to be omitted in the remainder of my article. If you do not sanction it — or whether you do or not — will you do me the justice to print that sentence, as an omitted one, indicating its place, in the August number?

I am not willing to be associated in any way, unnecessarily, with parties who will confess themselves so bigoted & timid as this implies. I could excuse a man who was afraid of an uplifted fist, but if one habitually manifests fear at the utterance of a sincere thought, I must think that his life is a kind of nightmare continued into broad daylight. It is hard to conceive of one so completely derivative. Is this the avowed character of the Atlantic Monthly? I should like an early reply.

Within a few months, the author sent two notes requesting the overdue payment of $198 for the essay. Because there is no evidence of additional correspondence between the two men, it is assumed the author was paid. Thoreau refused to provide another submission for the remainder of Lowell’s editorship.

After the deaths of both Phillips and his partner Charles Sampson (?-1859), William Ticknor (1810-1864) bought the magazine in 1859, expanding the covered topics. In 1861, James T. Fields (1817-1881) was appointed editor. The Atlantic published the remainder of Thoreau’s submitted works posthumously, beginning with “Walking” in the June 1862 issue. During Thoreau’s final months, the author dictated letters to his sister, Sophia (1819-1876), for inclusion with essays published in later issues of The Atlantic. “Autumnal Tints” (Oct. 1862) and “The Higher Law” (later called “Life Without Principle”) (Oct. 1863) preceded the manuscript for “Wild Apples” (Nov. 1862), which was sent with Thoreau’s last dated letter on 2 April 1862.

But some express themselves chiefly by their gait and carriage, with swelling breasts or elephantine roll and elevated brows, making themselves moving and adequate signs of themselves, having no other outlet.—Journal, 21 August 1852