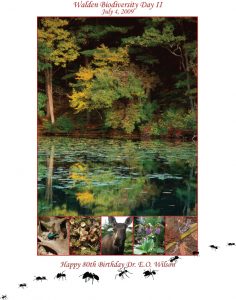 Walden Woods is a bit of an anomaly on the landscape – pitch pines dominate in pockets over exceptionally sandy soils left behind by the retreating ice at the end of the Wisconsin glaciation. Unusual environmental conditions can lead to unusual wildlife and plant species compositions, and there is perennial interest in understanding the dynamics of species in this area.

In the late 1990s, Massachusetts began state-wide efforts to document biodiversity, and one-day BioBlitz events, dubbed “Biodiversity Days,” were conducted at sites around the state. On July 4, 1998, local experts gathered in Concord for a major Biodiversity Day event where hundreds of species of plants, animals, fungi, lichen and moss, and all manner of life were cataloged. An extensive checklist was produced for the observations made on Biodiversity Day in 1998.

To celebrate E.O. Wilson’s 80th birthday in 2009, The Walden Woods Project sponsored a second Biodiversity Day and brought together dozens of experts and amateur naturalists to reassess the biodiversity of Walden Woods. Over the 4th of July weekend, once again an extensive checklist was created.

In September, 2018, the National Park Service sponsored a BioBlitz at the Minute Man National Historical Park’s Old North Bridge Visitor Center, where 75 people recorded 751 species in the course of one day! Check out the report here.

On July 6, 2019, The Walden Woods Project, the National Park Service, E.O. Wilson Foundation and Peter Alden are hosting the 2019 Great Walden BioBlitz where we hope to have hundreds of taxonomic specialists, students, families, and anyone interested in biological diversity on hand to help us reach a goal of 2000 species recorded in one day.

The love is faint-hearted and short-lived that is contented with the past history of its object. It does not prepare the soil to bear new crops lustier than the old.—Journal, 14 March 1842