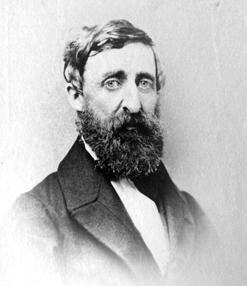 Henry David Thoreau lived in the mid-nineteenth century during turbulent times in America. He said he was born 0n July 12, 1817, “in the nick of time” in Concord, Massachusetts, during the flowering of America when the transcendental movement was taking root and when the anti-slavery movement was rapidly gaining momentum. His contemporaries and sometimes-neighbors included Nathaniel Hawthorne, Bronson Alcott, Margaret Fuller, and his mentor, Ralph Waldo Emerson.

Social reformer — Naturalist — Philosopher — Transcendentalist — Scientist. These are just some of the terms by which the work of Henry David Thoreau can be categorized. It is perhaps the many “lives” of Thoreau, both individually and collectively, that beckon such a diversity of people to his writings.

As a social reformer whose words echo the principles on which the United States was founded — that it is a person’s duty to resist injustice where it is found — Thoreau’s writings influenced Gandhi’s work in India, Tolstoy’s philosophy in Russia, and King’s civil rights stand in the United States. Wherever in the world individuals and groups embrace human rights over political rights, they invoke the name of Henry David Thoreau and the words of his essay. “Civil Disobedience“: “Can there not be a government in which the majorities do not virtually decide right and wrong, but conscience? . . . Must the citizen ever for a moment, or in the least degree, resign his conscience to the legislator? Why has every man a conscience, then?”

As a naturalist, Thoreau understood that the path to a greater understanding of our life on earth is through an understanding of the natural world around us and of which we are part: “We can never have enough of nature. We must be refreshed by the sight of inexhaustible vigor, vast and Titanic features, the sea-coast with its wrecks, the wilderness with its living and its decaying trees, the thunder cloud, and the rain which lasts three weeks and produces freshets. We need to witness our own limits transgressed, and some life pasturing freely where we never wander.” (Walden)

As a philosopher and Transcendentalist, Thoreau found a pantheistic sense of spirit and God: “I do not prefer one religion or philosophy to another. I have no sympathy with the bigotry and ignorance which make transient and partial and puerile distinctions between one man’s faith or form of faith & another’s . . . To the philosopher all sects, all nations, are alike. I like Brahma, Hari, Buddha, the Great Spirit, as well as God.” (Journal 1850)

As a scientist, Thoreau embraced the controversial work of Darwin, and developed theories of forest succession at the same time one of Harvard’s leading naturalists, Louis Agassiz, was still touting the spontaneous generation of plants. Thoreau was able to praise the scientific method — “Science is always brave, for to know, is to know good; doubt and danger quail before her eye.” — while accepting its limitations: “With all your science can you tell how it is — & whence it is, that light comes into the soul?”

There is an old joke among Thoreauvians that most people know Thoreau as the man who spent half his life at Walden Pond and the other half in jail, but the reason that his brief time at Walden and his one night in jail have become such defining moments in his life can be summed up under one term: Writer. Thoreau was one of the most powerful and influential writers America has produced. His prose style was unequaled. And although only a small part of his work was published in his short lifetime, he was a prolific writer whose collected works filled twenty volumes when collected in 1906. The publication of his journal of over two million words in 1906, the first time an American author had his journal published in full, showed the recognition afforded him by his publisher, Houghton Mifflin.

Thoreau died 0n May 6, 1862. Ralph Waldo Emerson wrote in his eulogy: “The country knows not yet, or in the least part, how great a son it has lost. . . . His soul was made for the noblest society; he had in a short life exhausted the capabilities of this world; wherever there is knowledge, wherever there is virtue, wherever there is beauty, he will find a home.”

Unquestionably, Thoreau enjoys greater national and international popularity today than ever before. His books are selling at an unprecedented rate. People are particularly drawn to his belief of finding spirituality in nature — a philosophy woven throughout his books and essays. As our lives become ever more complex, we hunger for simplicity and a communion with nature that Thoreau insists will lead to truth and spiritual renewal.

A note on pronouncing the name Thoreau

In determining the way in which to pronounce his name, it seems best to bow to the authority of those who knew Thoreau well. Edward Emerson, the son of Ralph Waldo Emerson, is very clear. In a letter to Dr. Loring Holmes Dodd, October 11, 1918, he wrote: “We always called my friend Thó-row, the h sounded, and accent on the first syllable.” [The Goddard Biblio Log, Spring 1973, p. 7]

It seems to be a law that you cannot have a deep sympathy with both man and nature.—Journal, 11 April 1852