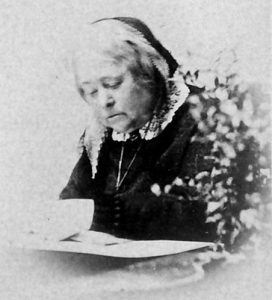 Elizabeth Palmer Peabody was born on May 16, 1804 in Billerica, Massachusetts. Her father, Dr. Nathaniel Peabody, worked as a dentist. Her mother, Elizabeth Peabody, was an educator and author.  Elizabeth Palmer was the eldest of six siblings: Mary, Sophia, Nathaniel, George, and Wellington.

Due to her parent’s rigorous teaching and support, Elizabeth started her own private school at age sixteen. In her free time as a teacher, Peabody was tutored in Greek by nineteen-year-old Ralph Waldo Emerson.

In 1840, Peabody opened a bookstore and lending library, also in Boston. Her bookstore became a meeting place of the Transcendentalist Club. Elizabeth Peabody was the first woman to host a Transcendentalist Club meeting. Later that same year, Peabody began publishing books. She published a thousand copies of the antislavery book Emancipation, written by her mentor Dr. William Ellery Channing.

Reflecting on her bookstore, Peabody said,

“I came into contact with the world as never before.”

A year after opening her bookstore, Elizabeth Peabody became the second publisher of The Dial, a Transcendentalist magazine which ran from 1840 to 1844.  Henry David Thoreau’s writing was first published in The Dial.

In 1849 she edited the literary journal Æsthetic Papers which only lasted for one issue but contained the first printing of Thoreau’s “Resistance to Civil Government.” 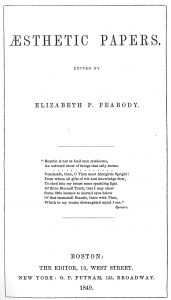 Inspired by her own passion for education and Friedrich Froebel, a German educator who initiated the concept of guided play for children, Peabody opened the first American kindergarten in 1860. Peabody’s kindergarten was located on Pinckney Street on Boston’s Beacon Hill.

Peabody first learned about Friedrich Froebel while attending a party in Boston in 1859. At the party, Peabody met Margarethe Schurz, the wife of a Wisconsin politician, and her daughter Agathe. Peabody remarked to Mrs. Schurz,

“‘that child of yours is a miracle—so child-like and unconscious, yet so wise and able, attracting and ruling the children, who seem nothing sort of enchanted.’ ‘No miracle, but only brought up in a kindergarten,’ said Mrs. Schurz. ‘A kindergarten! what is that?’ ‘A garden whose plants are human. Did you never hear of Froebel?’”

Throughout her life, Elizabeth Peabody worked to create interest in and fundraise for new schools. One school which was particularly important to her was Sarah Winnemucca’s school for Piutes children, native to present day Nevada.

By the time she was in her seventies, Elizabeth Palmer Peabody was a public figure. Newspapers reported when she fell into a snowbank and asked the people who helped her up if they knew about Sarah Winnemucca. Peabody was declared “The Grandmother of Boston.”

Peabody was a well-known Transcendentalist, alongside Henry David Thoreau, Ralph Waldo Emerson, Amos Bronson Alcott, and Margaret Fuller. Elizabeth Peabody spent years campaigning to establish Froebel’s kindergarten throughout the public school system. Today, the results of her effort are still in place. Some of Peabody’s most notable literary pieces include First Steps to the Study of History, and articles included in The Kindergarten Messenger. At age 89, Peabody’s life came to an end on January 3, 1894. She is buried in Sleepy Hollow Cemetery in Concord.

We are most apt to remember and cherish the flowers which appear earliest in the spring. I look with equal affection on those which are the latest to bloom in the fall.—Journal, 31 August 1850