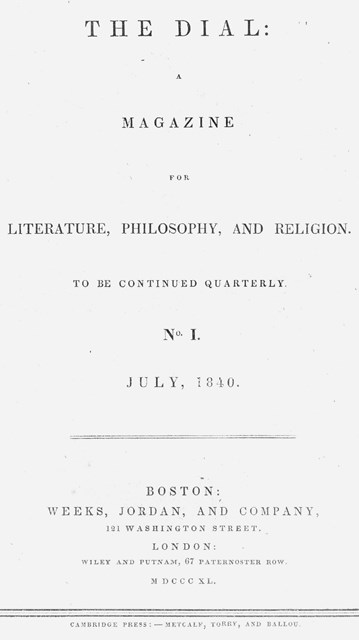 The Dial, the only journal by the New England Transcendentalists as a group, was published in four volumes from 1840-1844. Modeled on European periodicals like Britain’s The Monthly Magazine and the American journal The Western Messenger, The Dial included poetry and prose, as well as literary and music criticism. Many of the same writers featured in The Western Messenger, edited by James Freeman Clarke (1810-1888) and Christopher Pearse Cranch (1813-1890), also contributed to The Dial. Margaret Fuller (1810-1850) served as editor from 1840-1842. Ralph Waldo Emerson (1803-1882) edited the magazine in 1842-1844, with the exception of the April 1843 issue, for which Henry David Thoreau (1817-1862) served as editor.

Prior to the 1836 start of “Hedge’s Club” or the “Transcendental Club,” a group of friends discussed producing a journal to reflect a new way of thinking. In fact, the idea of publishing a journal contributed to the founding of “Hedge’s Club.” With the introduction to, and seeing similar ideas shared within, The Monthly Magazine in January 1839, club discussions of a new American journal rose again. According to Amos Bronson Alcott (1799-1888), the group discussed “the subject of a Journal designed as the organ of views more in accordance with the Soul” in the 18 September 1839 meeting of the Transcendental Club.

Unlike Orestes A. Brownson’s (1803-1876) Boston Quarterly Review (1838-1842), this new journal, unaffiliated with a political party, embodied what Alcott called “a free journal for the soul which awaits its scribes.” By January 1840, Fuller was corresponding with various writers, gathering submissions and issuing denials for contributions to the new magazine. The 4 May 1840 prospectus indicated the magazine would be published quarterly, in January, April, July, and October, and each issue would contain 136 octavo pages, that is, 544 pages per year. Alcott proposed and Emerson confirmed a title that suggests a sundial. The opening page reads, in part, “The DIAL, as its title indicates, will endeavor to occupy a station on which light may fall; which is open to the rising sun; and from which it may correctly report the progress of the hour and the day,” a reference indicating the ways in which many people lived in nineteenth century America.

In the editorial introduction, Emerson expanded on the meaning behind the journal’s title:

And so with diligent hands and good intent we set down our Dial on the earth. We wish it may resemble that instrument in its celebrated happiness, that of measuring no hours but those of sunshine. Let it be one cheerful rational voice amidst the din of mourners and polemics. Or to abide by our chosen image, let it be such a Dial, not as the dead face of a clock, hardly even such as the Gnomon in a garden, but rather such a Dial as is the Garden itself, in whose leaves and flowers the suddenly awakened sleeper is instantly apprised not what part of dead time, but what state of life and growth is now arrived and arriving.

Among the most important periodicals for writers like Thoreau, The Dial provided exposure and confidence to more than 40 authors and poets. At one point, Fuller rejected one of Thoreau’s essays, “A Walk to Wachusett” (1842), with a mix of criticism and encouragement. The Concord surveyor revised and submitted the writing to The Boston Miscellany of Literature and Fashion (1842-1843), a magazine with a larger audience, before including the work in A Week on the Concord and Merrimack Rivers (1849). Many of Thoreau’s 23 essays and poems published in The Dial are found in A Week on the Concord and Merrimack Rivers (1849), “Autumnal Tints” (1862), and “Natural History of Massachusetts” (1842). At the 1862 funeral of the Walden author, Alcott read “Sic Vita,” a Thoreau poem published in The Dial’s first issue of 1841 under the title “Stanzas.”

Subscriptions to The Dial, each costing three dollars per year, peaked around 300 subscribers. By 1843, the number of subscribers shrank to 200, too low to meet the journal’s printing costs. In addition, The Dial did not pay contributors, so obtaining new works from authors and poets became increasingly difficult. The acting bookkeeper Elizabeth Palmer Peabody (1804-1894) notified Emerson of the journal’s financial situation. The Dial published its final issue the following year. Attempts to revive the publication that began with the idea of continuing the work set forth by the Transcendentalists were attempted in 1860 and 1880-1929.

In addition to the above-mentioned writers, the more than 40 contributors to The Dial include John Sullivan Dwight (1813-1893), George Ripley (1802-1880), Samuel Gray Ward (1817-1907), William Ellery Channing (1780-1842), Frederic Henry Hedge (1805-1890), James Russell Lowell (1819-1891), and Jones Very (1813-1880). Emerson’s brothers, Charles Chauncy (1808-1836) and Edward Bliss (1805-1834), also posthumously contributed when the Sage of Concord included their final journal entries and poems in The Dial. Most contributors used initials or a pseudonym, if any identifier at all. Several copies of the magazine, including those owned by Emerson, Channing, Thoreau, and Thoreau’s friend Daniel Ricketson (1813-1896), had hand-written identifications added by the respective copy owners. It is through these personal identifications and the writers’ subsequent publications that most of the works’ authors are known.

Thoreau’s Contributions to The Dial:

In this part of the world it is considered a ground for complaint if a man's writings admit of more than one interpretation. — Walden—Walden