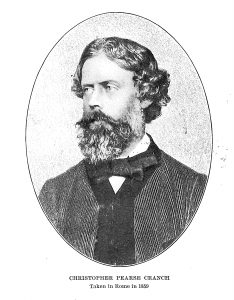 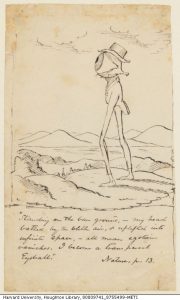 In addition to publishing poetry, 1841 brought changes for Cranch when the poet met Elizabeth De Windt, a niece of John Quincy Adams, in August. The couple married October 10, 1843 and raised four children, one of whom wrote a biography based on personal memories and her father’s unpublished autobiography. As noted by Leonora Cranch Scott, most of her father’s writings went unpublished. Between 1841 and 1890, Cranch and his family moved between Italy, Paris, New York, and Massachusetts. Cranch traveled to Europe to learn landscape painting so he could support his wife and children after leaving the Unitarian ministry. The 1844 Poems is comprised of Cranch’s poetry collection that was previously published in The Western Messenger. Cranch also wrote and illustrated children’s books, including The Last of the Huggermuggers: A Giant Story (1856) and Kobboltozo: A Sequel to the Last of the Huggermuggers (1857). The manuscript for The Legend of Dr. Theophilus; or, The Enchanted Clothes (c. 1870) was undiscovered until the 1980s. According to the editors of the 1993 edition of Three Children’s Novels, which includes the aforementioned stories, the novel length books were written specifically for children and were the first of their kind by an American author.

I say, break the law. Let your life be a counter friction to stop the machine.—"Civil Disobedience"