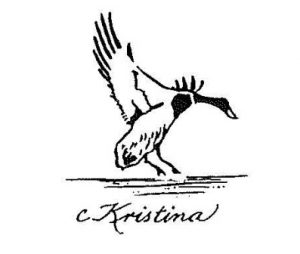 Kristina Joyce was born in Carthage, Missouri on May 28, 1945.  Her father, Robert Monroe Campbell (originally from Neosho, Missouri), was serving in WWII as a surgeon in the navy, and her mother, Harriet Annabel McBride (originally from Flagler, Colorado) was a registered nurse.  Harriet was a direct descendant of Mary Norris Allerton who came over on the Mayflower; Robert, on his mother’s side, was a descendant of Asa Graves from Sunderland, Mass., who served under George Washington in the American Revolution. Harriet passed away on February 8, 2014; Robert passed away on December 25, 2005.  Joyce’s sister, Cynthia Bess Campbell Easterling, works in continuing medical education in Durham, North Carolina. Joyce has two children: Keir Robert Joyce (born July 22, 1972) and Tara Kirstin Joyce (born March 16, 1977).  Keir and his wife Joy Napier live in Baltimore and have two children: Emma Marie Joyce (born March 11, 2001) and Ryan Beckett Joyce (born March 16, 2003). Tara lives in Boston.

Joyce holds a bachelor’s degree in art from Hood College, and a master’s degree in art education from Massachusetts College of Art.  She has taken courses in ceramics and watercolors at the DeCordova Museum School, and courses in graphic and interior design at the Boston Museum of Fine Arts School.  Joyce’s art focuses on drawing and painting from seashells, and her current work is exhibited in Concord, Mass.  Joyce is a member of both the Boston Malacological Club and the Boston Mineral Club.  Besides creating her own art exhibits, Joyce also hosts drawing classes at her studio for young students; each spring, their art is exhibited in the Children’s Room of the Concord Free Public Library.  Joyce’s artwork has also been featured on the covers of Bob Lawson’s album “The Kids Collection of Greatest Classics” music arranged by Concord’s, and her illustrated articles are featured in The Concord Web Magazine and The Concord Journal.

Her first exhibit, Calligraphy and art on the shells of Concord, was in 1983 at the Thoreau Lyceum Exhibit for Thoreau Society, which is also the year that she met Mary P. Sherwood and began a professional working relationship with Walden Forever Wild (WFW) that lasted the next ten years.  Joyce designed a logo, as well as booklet covers, for the organization.  She also scripted fliers, petitions, cards, and announcements, and oversaw the editing and printing of the organization’s publications.  In 1993, when Sherwood resigned from WFW, the organization was restructured, and Joyce decided to end her relationship with WFW.

This collection includes materials relating to Joyce’s time working with Walden Forever Wild (WFW), the organization that Mary Sherwood founded in 1980.  Formats include correspondence (the majority of which is from Sherwood), newspaper clippings, journals from other related organizations, Joyce’s original artwork and calligraphy for various professional WFW projects, videotaped interviews, and other textual materials.  Also included in this collection are Joyce’s copies of Sherwood’s three unpublished manuscripts: Wild Goose her autobiography, God’s Drop, written about Walden, and Wild Petals, written about her love of flowers.

Original order of materials has been maintained.  Oversized folders are marked with an asterisk (*); these folders have been housed separately from the rest of the collection.

I have heard of some who were 15 years a dying—a shiftless business for which neither gods nor mortals have any sympathy to spare.—A Week on the Concord and Merrimack Rivers