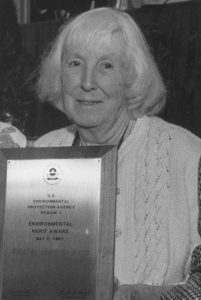 Mary (“Bobbie”) Elizabeth Pasco Sherwood (May 1, 1906-July 29, 2001) was born in Hartford, Connecticut.  At the age of 15, Sherwood’s father, who felt women should either marry young or work, forced her to leave school and she spent the next six years working on the assembly line at the Royal Typewriter Company’s ribbon spool factory in Hartford.  She went back to high school at the age of 21 as a junior, and graduated from Hartford Public High School in June of 1930.  Sherwood went on to earn her bachelor’s degree in forestry from the University of Connecticut in 1934, the first woman in the United States to do so.  In 1937, she earned a Master’s degree in wildlife management from Cornell University.  After graduation, Sherwood worked at the museum at the People’s State Forest in Barkhamsted in Connecticut.  Sherwood was also Connecticut’s first woman nature guide for the State Fish and Game Department.  Sherwood was married very briefly in the early 1940’s to James Sherwood, a military meteorologist.  Shortly after their marriage, he went off to fight in the war and was reported missing in action only months later.

It was also during World War II that Sherwood got her professional break; in 1944, she became the first female forester in Wisconsin where she served as Junior Forester for the state of Wisconsin. Sherwood’s love of nature was focused on wildflowers, and after leaving her position in Wisconsin, she returned to Connecticut and bought 10 acres of land with friend and partner Ruth Hardy.  With the land, she started a nursery and opened the Wildflower and Fern Nursery in Falls Village in Canaan, Connecticut.  Sherwood also spent time teaching zoology and botany at the University of Maine in Portland.  In 1957, Sherwood moved Florida for a part-time position researching plant life at the University of Florida in Gainesville; she also worked as a nature guide at Everglades National Park.

It was during this time that she reconnected with Henry David Thoreau’s writings, whom she had dismissed when she first read his work during her 20s.  Sherwood’s ideals aligned passionately with those of Thoreau’s, and she decided to move to Concord, Massachusetts in 1958 to live as close to Walden Pond as she could; upon arrival, she immediately became active in the Thoreau Society.  Sherwood believed there should be a place in Concord dedicated for people to come and study the life and writings of Thoreau; she advocated strongly, and in 1967, the Thoreau Lyceum was established.  After working at the Lyceum for about a year, Sherwood picked up and moved to Maine, where she started another organization dedicated to the teachings of Thoreau, the Thoreau Fellowship, as well as a journal called The Thoreau Journal Quarterly (Sherwood was an editor, as was Marie Olsen Urbanski).  She also opened her second nursery, the Thoreau Wild Garden Nursery, located in Greenfield, Maine, and earned the nickname “Wildflower Mary” from local journalists who documented her activities.  After living in Maine, Sherwood went to Canada, where she camped for a year.

In 1978, Sherwood moved back down to Florida, only to return to Connecticut, where she served as Chairman of the Board for the organization Walden Forever Wild (WFW), which she founded in 1980. Sherwood had previously been involved in the Save Walden Pond Advisory Committee, which was dedicated to the restoration and preservation of Walden Pond.  While working with WFW, Sherwood held strong her belief that Walden Pond should be a state nature sanctuary, and that public access to the pond should be limited; she also believed that swimming in the pond should be banned, a controversial belief that put her at odds with other members of the organization.  Sherwood also did hands-on conservation work: every summer from 1980 to 1984, she planted shrubs and bushes, reforesting the slopes above Walden Pond’s Red Cross Beach, in an attempt to halt the erosion of the land.  In 1987, WFW was presented with an Environmental Merit Award by the U.S. Environmental Protection Agency.

During 1989 and 1990, Sherwood helped establish the Albert E. Moss Forest, Wildflower and Wildlife Sanctuary; the sanctuary is located on 157 acres of land owned by the University of Connecticut in Mansfield, Connecticut.  The sanctuary is named for Professor Moss, who developed the first curriculum in forest management at the university in 1924, and was one of Sherwood’s teachers.  In the early 1930’s, Sherwood was one of the students who had planted the towering red pines that now line the sanctuary.  Shortly after, Sherwood was awarded the first annual “E Award” from “E” Magazine, as known as E-The Environmental Magazine.  The first issue was printed for January 1990, and moved to on-line publication in 2013.  In 1992, Sherwood was one of the 36 women honored at the One Hundred Years of Women ceremony at the University of Connecticut, marking the 100th year of educating women at the Storrs campus   In the late 1990s, Sherwood moved into the Mansfield Center for Nursing and Rehabilitation in Connecticut, where she lived for the rest of her life.

Sister of the Old Wild Goose is Sherwood’s unpublished autobiography.

This collection consists of the personal papers of Mary P. Sherwood.  Also included in this collection are the records of the Thoreau Fellowship and Walden Forever Wild, organizations that were created or run by Sherwood.  Materials are mainly textual, consisting of extensive correspondence, news clippings, publications created by Sherwood (articles, pamphlets, and manuscripts), and other printed matter.  Other formats include photographs, videotapes, and cassette tapes.

The papers have been arranged in 3 series, all of which have been further arranged in subseries.  Series arrangement was imposed during processing.  Original order has been maintained within folders when possible; when original order is unknown, materials are arranged chronologically within folders.  Generally, all folders are arranged alphabetically, which reflects Sherwood’s filing systems.  Duplicates and financial records were weeded during processing.  Oversized materials are housed separately from the rest of the collection.

This series contains personal material, such as photographs and interviews, about Sherwood.  Also included in this series are Sherwood’s research material and her publications.  This series also contains publications by other authors that Sherwood collected throughout her life.

This series consists of the records and materials related to the Thoreau Fellowship.  Formats include correspondence, news clippings, and other textual material.

It is hard to have a Southern overseer; it is worse to have a Northern one; but worst of all when you are yourself the slave-driver.—Journal, 1845-47