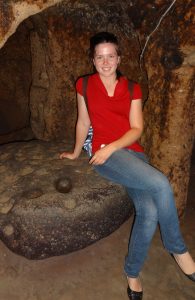 A warm breeze licked around the house, brushing my hair against my cheek. I had been in Turkey for five days, and the group I was traveling with had been invited to a local family’s house for dinner. I was nervous, and slightly terrified. The culture I had seen over my short stay was incredibly different from my own, and I was fearful that I would not be able to connect to our host family. Leaving my shoes by the front door, I walked gingerly toward the living room, following the bobbing hijab of one of the daughters. She was eager to be friendly, and she even spoke a few words of English, but I found myself answering only in smiles and monosyllables. I had never had any Muslim friends at home, and I wasn’t an expert on their faith, myself, so I was petrified that I would say or do something that would offend these gracious people who had invited me into their home. Finally, to my immense relief, the daughter waved me into the living room, and I sat down rigidly, conscious of every muscle. The other guests filed in behind me, and I noticed that they, too, were oddly staid. Our Turkish interpreter chatted with our host (who spoke no English), and would occasionally translate a question that our host had asked us. I could see that he was trying to put us at our ease, but I could tell by the faces around me, and by the expression I felt on my own, that it was not working. Our host’s wife and daughters soon came into the room, their brightly patterned hijabs making the room outwardly cheery, yet highlighting even further the inward tension that we all felt.

My anxious eyes darted around the room, and suddenly stuck on the doorway. The fattest cat I had ever seen stood there, surveying its domain. The creature looked like an enormous sausage set up on table legs. Its neck, if it had one, was buried somewhere in rolls of fat and fur, so that its head looked like it was attached straight to its back. Its chest was so solid that its legs could only stick out at an angle. Its tail, dwarfed by the sheer mass of its body, made it resemble even more a sausage with a short link. I could barely contain my laughter, especially as the expression on the animal’s face clearly denoted that it was the queen of the house, expecting homage and gourmet food from its loyal subjects. Having finished its survey, the animal leisurely waddled into the room and collapsed regally at the feet of its master. I couldn’t help myself. A giggle escaped. Instantly contrite, I glanced up at our host, sure that I had offended him. To my surprise, however, he was glowing. He rapidly chattered something in Turkish, and the interpreter translated. “Do you like cats?”

“I love cats!” I replied, though still nervously. “I have one at home who looks like her.” I gestured at the feline, relaxed in obese luxury, and added to myself, “just thinner!” Pulling out my phone, I found a picture of my cat and passed it to our host. He was ecstatic. His family gathered around, and the older daughter, a girl about my age, asked me what my cat’s name was.

The room transformed. To me, it seemed as if this morbidly obese cat had rolled right in and physically broken the ice. I glanced across at the Turkish girl, and our eyes met. In hers, I could see all the worry, tension, and anxiety that I had been feeling – but I could also see the joy, unity, and peace that I felt now. For a fleeting moment, I looked through this girl’s eyes – through her unique culture, her distinctive religion, and her life, so different from my own, and realized that we were the same – two teenage girls with our own individual hopes, aspirations, and dreams.

Memories of my trip to Turkey will no doubt fade, but that night, the night when I experienced the miracle of looking through another’s eyes and seeing the prospect that life offered to her – and, despite our differences, finding it so similar to my own – will stay with me forever. It will also remain with me that these miraculous moments can come from anywhere – even morbidly obese cats.

The hero is commonly the simplest and obscurest of men.—"Walking"