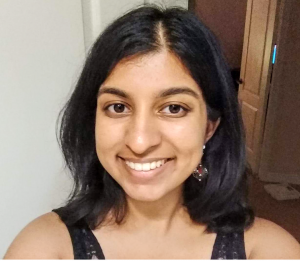 E Pluribus Unum were the words engraved on the nail-polish stained nickel staring up at me. “Out of many, one.” This is the coin toss that would determine my future path. I tossed it up, anticipating the verdict. It went up, it came down and to my great dismay…it disappeared behind the dresser.

Let me explain myself for getting rattled over a coin toss. It all started in the Academic Decathlon interview. About the fifth question in, the judge asked me, “What do you see yourself doing in ten years?”

This is a question I am very familiar with. In my Indian-American community, I was asked this question from the time I could talk. All my friends had figured it out and would say “doctor” and trigger the oohs. I was not so brilliant and would say, “I am exploring varied interests&quot; which triggered unsolicited advice to choose STEM.

“In ten years, I see myself advocating for human rights, starting my own company and running a record label” was my answer to the judge. She sighed. Her feedback, “Your passion is admirable, but it confuses me.” And then came the statement that would haunt me, “You have to pick one or the other.” I respected her opinion. It was as if I should do a coin toss to decide which endeavor I wanted to dedicate most of my time to. So I did just that.

In elementary school, my friend Kasey and I had play dates where we wrote songs. We mailed it to Disney, with the dreams of being Disney&#39;s youngest writers. Songwriting continues to be an obsession. One side of the coin. I started high school by starting the Young Social Activists Club. I found great satisfaction in advocating for issues, fundraising, and organizing guest speakers. The other side of the coin.

The first nickel I found had nail polish stains, but a little nail polish never stopped one from finding her true life purpose. “Out of many, one.” It was as if the US Mint had read my mind. Out of all of my interests, the nickel was going to choose one. Alas, the nickel fell behind the dresser, so instead of being given a single choice, I had to challenge myself to find a path.

The first role that allowed me to integrate my interests was an internship at ClimateMusic Project. Our mission: use music to spread awareness about climate change. This internship exposed me to unique industries. Merging my interests in music, activism, and entrepreneurship was suddenly an intriguing possibility. I enrolled in classes in community college to explore these interests.

My newfound obsession with integration led me to pursue TuneGuard. It was an idea I had for an app that could help songwriters protect their intellectual property. When I proposed this idea to the potential development team, the guys in the group were stunned that a girl proposed this idea. No girl had ever stepped into their territory, but they were receptive to its potential. We formed a partnership to develop the app.

When I recently mentioned my intended college major, my community kindly told me it is okay to take other majors if I cannot handle the rigor of STEM. Society’s opinion didn’t matter. I intend to further pursue my interests in college, merging towards the middle ground of both sides of the coin.

Recently, we had guests overnight. For my family this means cleaning every corner
of the house. I was cleaning behind the dresser. Lo and behold, the nickel stained with white nail polish stared back at me. E Pluribus unum and I had met again. I found the coin, but forgot which side was which. I realized my interests weren’t so divergent after all. E pluribus unum in my case didn’t mean “Out of many choose one”; it truly meant “Out of many integrate into one.”

There are nowadays professors of philosophy, but not philosophers.—Walden