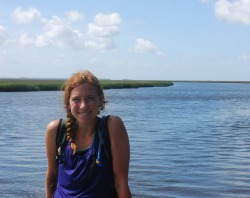 I used to wonder how people could be so disparaging and dissatisfied when surrounded by the beautiful Earth. I now suspect they simply aren’t seeing the same world I am. When I was a kid everyone wanted to play outside: to explore, to imagine, to be wild.Back then our eyes glistened with expectation of mystery and our hearts soared with possibility. Today, I don’t see that yearning for wildness burning behind the irises of my peers. Instead, I barely see their eyes at all. They don’t search for answers in the world, but are instead glued to books and screens, glancing up only when absolutely necessary.  Though surrounded by trees, flowers and streams, they seem to see only obstacles along their distracted journeys toward success and achievement.

Ralph Waldo Emerson once wrote: “To speak truly most adult persons do not see the sun. At least they have a very superficial seeing. The sun illuminates only the eye of the man, but shines into the eye and the heart of the child.” As I’ve grown older I have witnessed the blinding of my peers over time. Those who were once set alight by the luminescent rays of the sun are now unable to see the as anything more than a light source – a way to see only things that serve them. As we’ve grown we’ve been taught not to see the natural world, to look past nature and into the anthropocentric world of civilization.  Nature is a spectacle, wrapped up in a tiny package and called a park. Parks have become museums putting Earth on exhibit.

This is how we are taught to look at the world: a globe dominated by man’s infrastructure speckled with well-contained areas of wilderness designed for us to enjoy when we have time to take a break from our priorities. Society paints nature as unnatural, something to watch videos about or flip through pictures of, something that is only seen when we decide to look for it on screens or within fences. Nature has become something of a fairytale, elusive and enchanting. Never truly experienced.

Today I take a walk through a wooded park. As I look around I find my mind wandering and begin to wonder what it would be like to be one of these objects we place on display. I begin to put myself in nature’s shoes. First I fill the tiny feet of a small bird that rests his weight gently upon a thin branch. To him I must be a hulking monster, yet perhaps less terrifying than the bitter cold of winter which he likely feels lucky to have evaded today. From his tree branch I am as strange and intriguing to him as he is to me. He knows not, nor would he understand any of my thoughts. The “priorities” of human life would be lost on him. To him I am the object of observation.

Next I morph into a gentle giant: an oak tree. I feel invigorated by the sun as my branches stretch out toward the warmth and energy it offers. Towering high I look down on my human-self in pity. What a short lifespan almighty man is cursed with. And such a fragile body. Yet my human-self trudges so destructively, so heavily over the smaller creatures of the woods; careless. To the tree I am just another human, an animal who thinks herself greater than the rest who pass through the trees’ home; by species I am an enemy of the forest. Yet the tree doesn’t fear me but instead pities me for my quick transition from life to death; my quick turnover to fertilizer on which his roots can feed.

After taking over the tree’s persona I imagine myself as the squirrel who relies on the tree so heavily, the lake whose permanence is of greatest contrast to my mortal being and finally the sun whose light and warmth give life to every being and enchantment to every child. It is renewing, and humbling to picture not only myself, but also the world, from their point of view. To see the world not speckled by nature, but instead as the embodiment of nature. It is empowering to see the fantasy world of wilderness as the real world and the only world and invigorating to be again captured and swept away by the power of the planet. If only this were the world we looked for maybe then this would be the world we see.

Every path but your own is the path of fate. Keep on your own track, then.—Walden