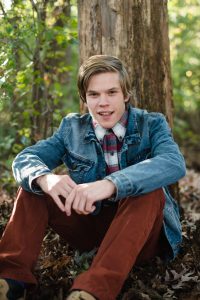 Clad in suits and wielding statistics inked onto our poster boards, we refused to move. Security officers flanked us, backing our group into the corner adjacent to Senator Limmer’s office. Thirteen hours ago there had been cameras everywhere, now it was just us and Capitol Security. My tongue tasted like parchment. Only six of us remained, the rest of the 22 students waited in a lobby outside the Republican offices. The Sergeant at Arms approached as five additional officers entered the hall; they had already threatened arrest, now all we had to do was wait.

Perhaps the most valuable tenet of Thoreau’s philosophy was civil disobedience. Without it, no environmentalist or activist could have ever influenced public and political opinion. The change I am most passionate in seeing is the abandonment of apathy and inaction in our society. We must learn to use Thoreau’s theories of public discourse to forge a better future or we risk losing everything. Climate change and environmental degradation are mass societal issues that can only be solved when our entire population becomes aware and active. Yet, despite the monumental impacts this change can have, its development begins at the individual level.

Abandoning apathy is no easy task. The mundane rhythm of day-to-day life conditions us to remain stagnant. Society’s segmentation convinces us we are alone and separated. In March of last year, I finally shook off my own weights of inaction to protest the lack of gun reform in my home state of Minnesota. Following the tragic Parkland Shootings, I translated my political opinions flung about at lunch tables and in classrooms into months of meetings with fellow students and advertising on social media. Weeks of planning with senators and representatives finally produced a school walk-out comprised of four schools and 500 students.

However, blocking off suburban streets was still far too detached from the policymakers hiding behind the walls of the Capitol. It still allowed them to remain apathetic and distant. A month later, I led a group of 22 students to conduct a 13-hour sit-in on Senator Limmer, the chair of the Minnesota Public Safety Committee. Starting at seven in the morning, we waited outside Senator Limmer’s office, debated with him in front of multiple news stations, and established a presence outside of the senate chamber during session. The day culminated in us interrupting a public safety committee meeting to demand hearings for three gun control bills. Our mic was shut off and we were promptly removed by security guards.

My dive into political activism, however, was not immediate. It took me a while, as Thoreau says, to “grade my ground” and feel confident enough to pull it all off. I used to pessimistically preach about how individual action can’t change anything. I was convinced that one extra person attending a march or that one piece of plastic I neglected to pick up wasn’t going to influence any greater outcome. Of course, if everyone on the planet embraced that ideology we wouldn’t have a single glimmer of hope at all.

What I began to understand, through cooperating with friends and representatives, was that individual change is inextricably linked with mass change, and therefore, can make the world a better place. All of society is comprised of individuals constantly making choices and changes that create a communal consciousness. Every single person that attended my school walkout made a personal, individual decision to show up and be part of a larger community. We need every lawmaker to do the same. We need everyone to abandon simplistic concepts of the “self” and see the intertwining community around them. Once we do this, we can fight off the constant undertow of apathy.

This is not just another command to “believe in yourself.” This is a call to action, and more importantly, a call to understanding. Thoreau advocated for civil disobedience because he knew that a divided and apathetic society is doomed. This fate is slowly swallowing up the new generation as political pessimism and the void of electronic media takes control. However, the sit-in I lead and the nation-wide protests following the Parkland tragedy gives me hope. Hope that the youth can grade not only their own ground, but the soil of our country as well. By embracing the self as an inherent part of every community we can begin to create the tolerable planet Thoreau calls for. Until we too, one day, can be surrounded by grandeur.

A healthy man, indeed, is the complement of the seasons, and in winter, summer is in his heart.—"A Winter Walk"