It is often debated whether Thoreau would have embraced many of the new-fangled tools and gadgets of the modern age, if he lived today. Would Henry have been seen around the coffee shops of Concord, consuming newspapers on a tablet? What would he have thought of weather apps?

One thing we should all be able to agree on is that he’d be enamored of wildlife cameras. When he finally broke down and purchased a telescope, his world opened in new ways, and he had the opportunity to closely observe nature from afar. Wildlife, or “trail” cameras take that advantage a step further, and allow us to observe wildlife without being anywhere near it, which lets us see them behaving in their most natural ways.

Over the past decade or so, remote-triggered “game” cameras have become increasingly available. They were developed primarily for use in hunting, but as their quality has increased and prices dropped, they have become a widely-used tool among ecologists looking to detect wildlife species that are secretive, active only at night, or otherwise difficult to observe.

Over the past couple of years, The Walden Woods Project has deployed an array of wildlife cameras around our properties in Walden Woods. We want to learn what wildlife species benefit from our conservation efforts, and we also use them to evaluate the effectiveness of our land management in terms of recreational use of our properties.

While we haven’t detected any wildlife species that were unexpected or surprising, we have been seeing a steady stream of a variety of species at most of our properties around Walden Woods. Deer, raccoon, coyote, and fisher are among the large animals that we regularly encounter on our properties. We anticipate capturing an image of a moose or bear, as these species are becoming more and more common around eastern Massachusetts, and will keep our cameras trained on attractive wildlife habitats around Walden to see who swings by. Connect with us on Facebook and Instagram for sightings! 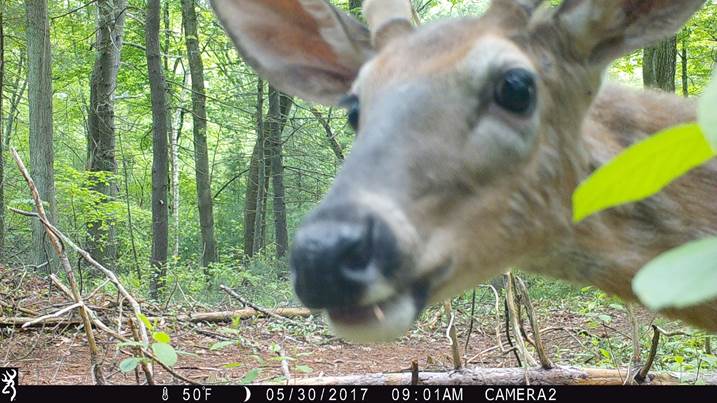 An inquisitive white-tail deer takes a close look and we get a close-up! Deer are common in eastern Massachusetts, and have been frequently captured on our cameras in Lincoln and Concord.

Veias, Menu, Zoroaster, Socrates, Christ, Shakespeare, Swedenborg,—these are some of our astronomers.—A Week on the Concord and Merrimack Rivers