Like the old “who’s buried in Grant’s tomb” question, every so often the “who’s buried in Thoreau’s grave” question comes back to haunt us. Most recently it was brought to our attention by Walden Woods Project friend and supporter, Dr. Ira Skolnik, who saw a photograph of the Thoreau family plot which looked different from what he remembered seeing at Sleepy Hollow Cemetery.

When Thoreau’s remains were moved from the Dunbar plot in the New Burying Ground up to Author’s Ridge in Sleepy Hollow, the graves had red sandstone markers. These were replaced in 1890 with a large granite monument and, shortly thereafter, the smaller stones that are there still. At this time there was a mix-up in the placement of Henry and his sister, Sophia’s, stones. There exist two undoctored images from the 1890s (though undated further) by the local photographer, Alfred Hosmer, which show, in one, Sophia on Henry’s left, and in the other, Henry on Sophia’s left. Later images, such as the one below by Herbert Gleason, continue to show the Henry-on-the-left version. 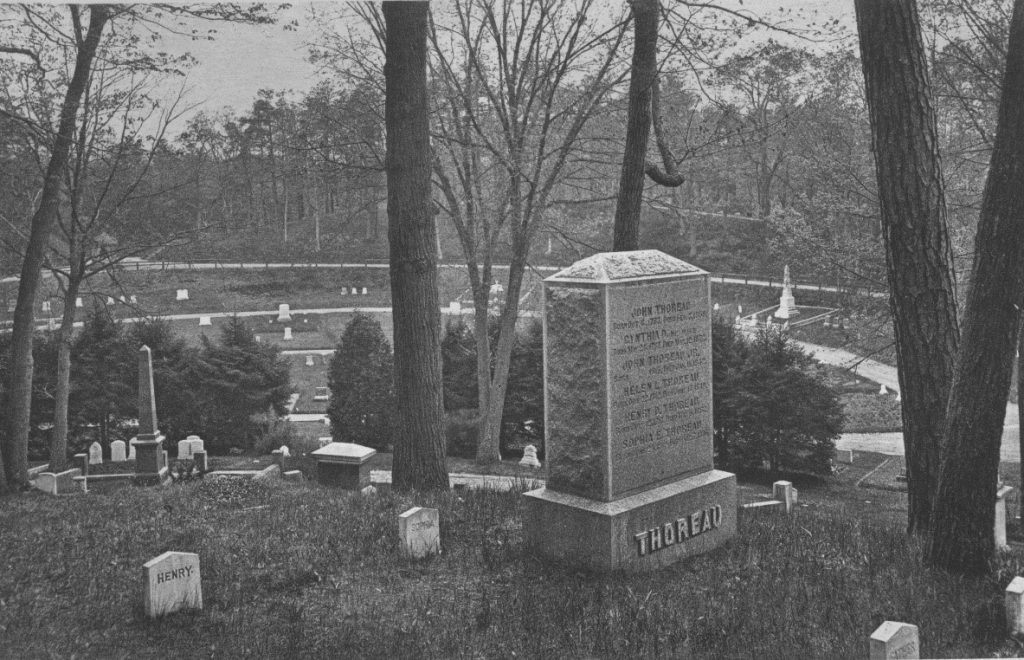 The most logical explanation is that when the stones were first placed and captured in an image by Hosmer, the stones had Sophia to her brother’s left, after which someone noticed the error and the stones were placed in what is the correct order, but there is no record that has yet been found offering any explanation or corroboration. As there was a brief period between the placing of the large granite monument and the smaller stones, following the order of the death dates to lay the stones and so placing Sophia’s stone the furthest left as the last interred would also make sense. Records of Sophia’s funeral do not shed any light on the mystery.

As Thoreau said in his 1851 journal, “We are surrounded by a rich and fertile mystery.” We did what he suggested – “May we not probe it, pry into it, employ ourselves about it, a little?” Not every mystery has a solution, or perhaps, not every mystery has an answer when we first ask the question. It is why researchers and historians keep probing and prying. This is part of the excitement about research. The mystery, the conundrum, and the faith that sooner or later a letter, a photograph, a map will surface that will give us the answer.

It is why The Walden Woods Project’s Library continues to collect and add to our collections, having grown from eight collections when we opened in 1998 to twenty now. Each new collection adds one more dimension to the whole. And who knows? The next letter added, the next manuscript, the next historic photograph, may answer the question: Who’s buried in Thoreau’s grave?

During our research, we leaned that the fee for perpetual care of the Thoreau family plot was never remitted. The Walden Woods Project covered these costs in honor of Thoreau and his family.

Nature would not appear so rich, the profusion so rich, if we knew a use for everything.—Journal, 11 August 1853