Henry David Thoreau was known throughout Concord, MA as a quirky fellow. Rather than work all day, Henry preferred to walk. And walk. And walk. He would walk the woods and fields of his town for hours every day, observing, noticing, and thinking. Sometimes, Henry would collect things that he wanted to study more closely at home, and carry them in his hat, in which he modified the liner to create a shelf of sorts for the purpose of holding such found items.

Henry paid close attention to the plants and animals in the world around him, and came to truly love what he saw.

What do you see in the world around you? What’s in your hat? 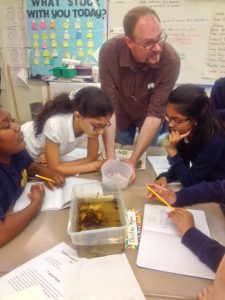 The curriculum is designed to facilitate a pick-and-choose approach to the material, to be used throughout the year (rather than in a condensed, time-limited unit), allowing you to use the lessons and other materials to support and enrich existing curriculum.

As Henry collected experiences and natural objects throughout each day–which he would think about, write about and learn from later that night or a day or two later–the Henry’s Hat® lessons invite students to “collect” their own experiences throughout the school year from which to learn through observation and exploration.

It would give me such joy to know that a friend had come to see me and yet that pleasure I seldom if ever experience.—Journal, 23 December 1851